Microchips – also referred to as integrated circuits – are considered to be among the greatest technological achievements of the last century. Their invention has paved the way for a digital revolution that keeps changing the world to the present day. The range of devices that rely on microchips still increases at an amazing rate and includes (desktop and laptop) computers, servers, tablets, smartphones, smartwatches, flash drives, portable music players, game consoles, cameras, televisions, electronic household appliances, elevators, cars and traffic guidance systems, airplanes, and countless others. It is often integrated circuits operating covertly that make our daily life so incredibly convenient.
They are fascinating pieces of technology that consist of millions or often billions of microscopic transistors. Just as fascinating as transistor counts is the speed that modern integrated circuits operate which can even be in the range of 4 gigahertz which is 4 billion operations per second. In the following chapters, the most interesting secrets of those engineering marvels will be uncovered.

At around 1940, computers consisted of thousands of vacuum tubes that were individually wired together in a very complex and expensive way. This design not only required a great deal of electricity, but it was also very maintenance-intensive. The ENIAC computer from 1946 had over 17.000 vacuum tubes and suffered a tube failure on average every two days, which was time-consuming to troubleshoot and repair. With the invention of the transistor in 1947 by Bell Labs, the components became significantly smaller, but the transistors were still wired together individually. This reduced power consumption of those computers and their overall size, but not their wiring complexity. It was not before the invention of integrated circuits before computers became way more efficient and easier to operate and maintain. Although an early concept for an integrated circuit goes back to 1949, it was ten years later when Robert Noyce (Fairchild Semiconductor) invented and patented the first monolithic integrated circuit chip based on a silicon substrate. At the same time, Jack Kilby (Texas Instruments) was working on a similar concept. In 1971, the Intel 4004 microprocessor was released. It is considered to be the first commercially produced microprocessor. It accomodated 2.250 transistors in a single chip, and came in a 16 pin Dual-Inline Package (DIP). Since that date, subsequent generations of microprocessors have been released with rapidly increasing transistor counts and operation speeds. An ever increasing demand for integrated circuits by consumers and businesses has allowed semiconductor production to grow to a global industry that made over 400 billion USD in annual sales in the year 2019.

The large success of integrated circuits can be attributed to several different factors and advantages.

Microchips do not all work the same. In fact, there are thousands of different chips for today's large variety of technical devices. Only just a few types of ICs are standardized so they can be bought by consumers to upgrade, for example, their personal computer. However, the majority of ICs produced are highly customized for use in very specialized equipment like industrial machinery, aircraft control systems, medical devices, remote controls, etc. Here are three helpful ways to categorize integrated circuits:

I - Categorization according to the signals processed: Analog ICs vs. Digital ICs vs. Mixed Signal ICs

Analog integrated circuits (also called linear integrated circuits) are designed to process analog signals. An analog signal can be any voltage, current, or frequency that is used to represent information, and the special thing about analog ICs is that they can perceive and process any value between the lowest signal and the highest signal within their range of operation. For example, an analog integrated circuit that is designed to read analog signals between 0 Volts and 20 volts can read a voltage of 2.6 Volts, or 14.4 volts, and will process these exact values according to its specification. An analog IC very often uses transistors that are optimized for amplifying signals, and therefore analog ICs are very widely used for audio amplification and radio transmission. Other applications include ICs for power supplies, sensors, timers, etc.

II - Categorization according to the structure of integrated circuit

A hybrid is a combination or mixture between two elements. In terms of integrated circuits, a hybrid IC is a combination of two rather different approaches to implement electronic circuits: Using discrete components and monolithic structures produced on silicon crystals. The package of a hybrid IC typically consists of a ceramic substrate, and has a layer of metal interconnects applied to the surface. Using production techniques called thin-film or thick-film, resistors are printed onto the substrate, connecting individual metal wires. Various discrete components (single transistors, diodes, capacitors, coils, etc.) are connected to the surface by either soldering or wire-bonding them to the metal interconnects. An isolating solder mask is applied over the wire traces in areas where bond wires could possibly sag and cause short circuits. What makes the structure of an IC chip a true hybrid is that separate circuits that have been fabricated on silicon crystals are glued to the substrate, and wire-bonded to the existing circuitry. Hybrid IC technology became very popular in the 1960s and 1970s, and is still in use today to some extent. 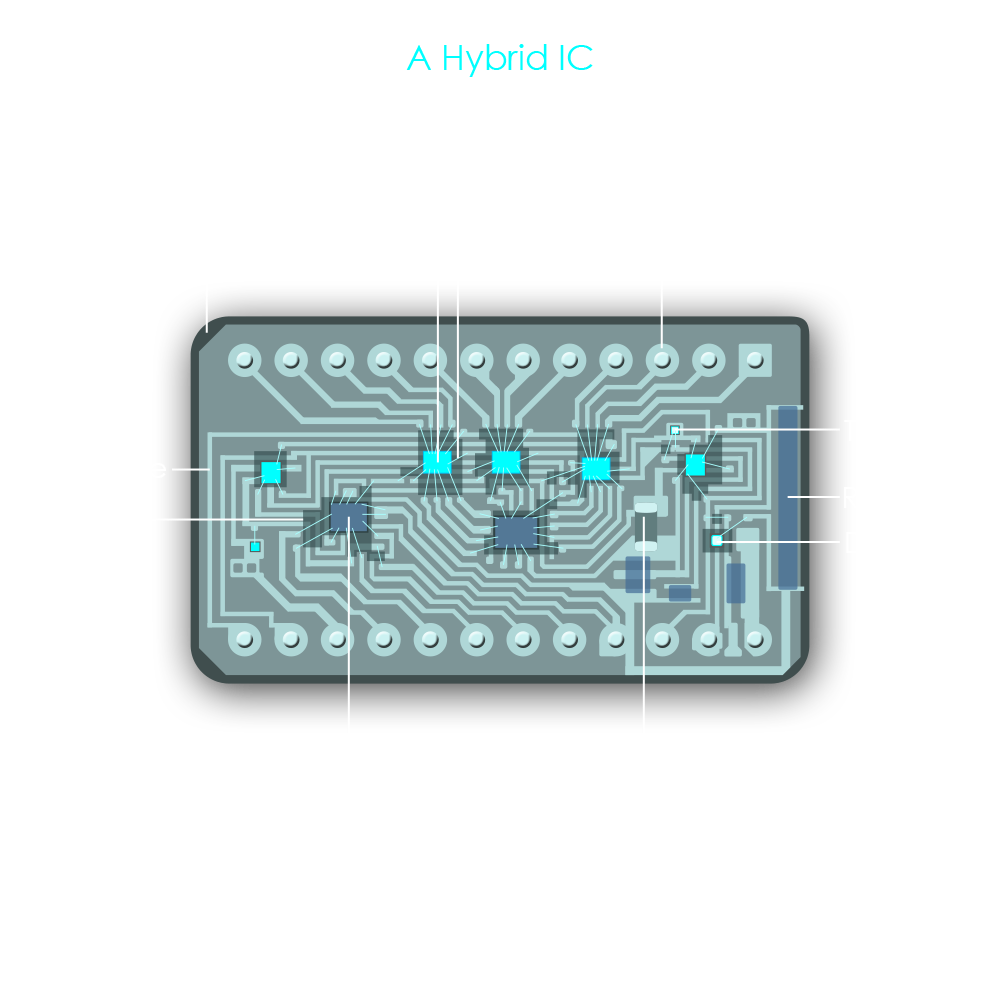 The term monolith originates from the Greek words monos, meaning 'single' and lithos, meaning 'stone'. A monolithic IC is a semiconductor where all circuits and all electronic elements of that IC have been fabricated in and on the surface if one single piece (chip) of substrate, e.g. on one piece of silicon wafer. The chip is then usually wire-bonded to the metal interconnects of the package which lead to the connection pins, and is enclosed in a protective epoxy or ceramic package. With this technology, active devices (transistors) as well as passive components (resistors, diodes, capacitors) can all be fabricated on the same piece of silicon crystal. Although the development and fabrication of monolithic ICs is extremely complex, monolithic ICs offer numerous advantages over other IC structures: A smaller size, higher operating speed, lower power consumption, and greater overall reliability. The following information pages will mainly deal with monolithic integrated circuits. 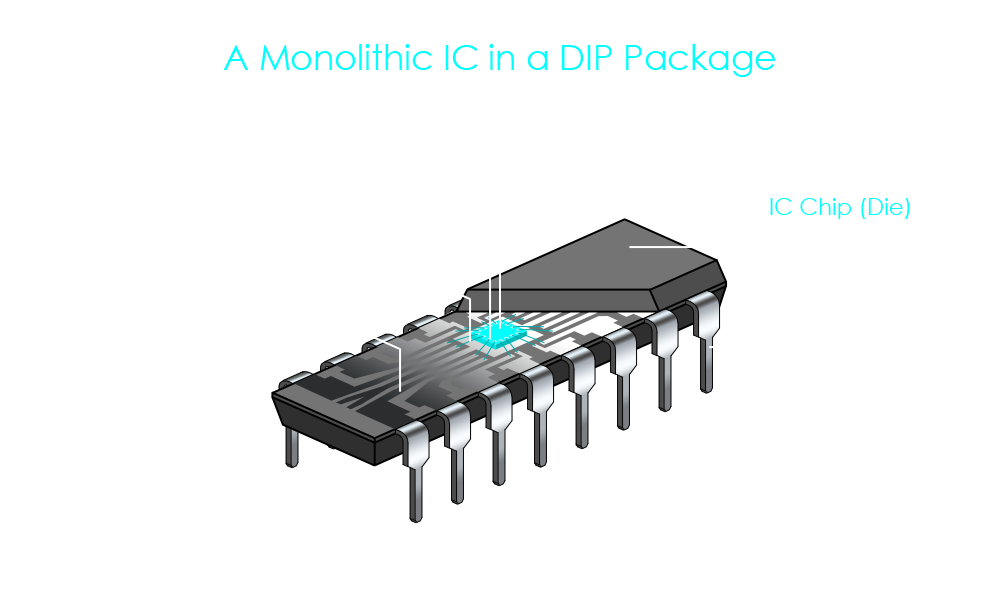 III - Categorization according to the function of use: Logic IC vs. Memory IC vs. Systems-on-Chip

Logic ICs are semiconductor devices that perform logical operations on digital input signals, and produce a digital output signal. There is a very broad spectrum of logic ICs, ranging from simple logic gate ICs to highly complex special-purpose ICs developed for certain purposes. Here is a list of some very common types of logic ICs:

Memory ICs store information. They can be specified based on their methods for reading, writing, and storing data. Two broader classes of memory ICs are Random Access Memory (RAM) and Read-Only Memory (ROM):

A System-on-Chip, also known as an SoC, is an IC that integrates an entire computer system onto a single platform. Therefore, an SoC often includes power management modules, the CPU, GPU, IPU, memory units, WiFi connectivity module, audio unit, and others, on one single piece of silicon. They are considered to be more powerful and faster than traditional forms of system implementations while being smaller and more power efficient. Therefore, SoCs have become the most popular type of IC for modern smart devices and the internet of things.

From Sand to Silicon - IC Fabrication

To manufacture a modern integrated circuit is one of the most complex and difficult endeavours ever. It can take over 400 steps to process an integrated circuit, as layers of material are deposited and removed over and over again to create desired patterns. In addition, numerous very complex production technologies involving atomic diffusion, metallization, etching, exposure to ions and special light, and others are required to develop structures on a substrate. The diagram below only includes the most important steps. 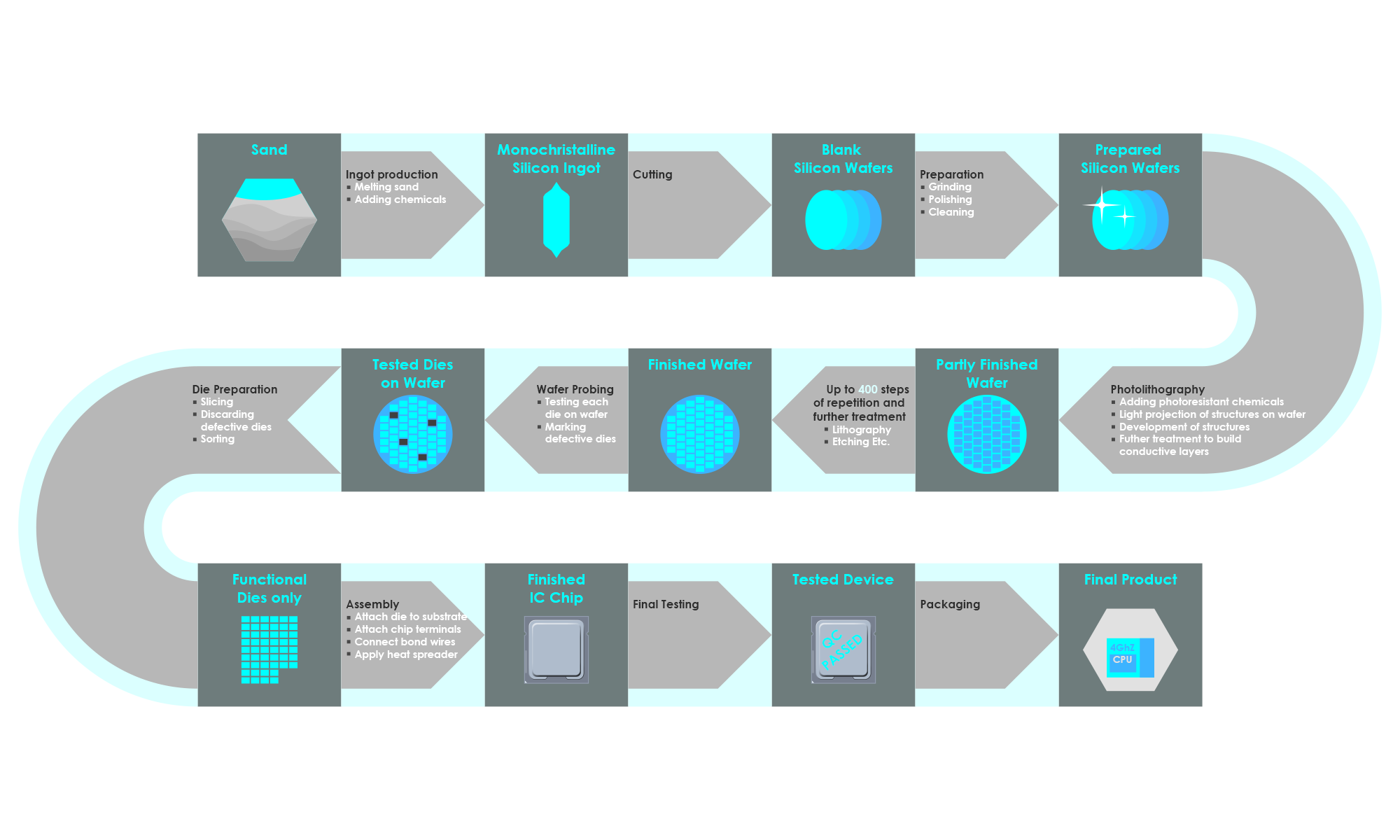 The raw material for integrated circuits is usually silicon, and it can be produced in different levels of purity:

Once the manufacturing process has started, even a single dust particle can ruin an entire microchip. For that reason, integrated circuits are fabricated in special clean rooms. These offer a dust-free environment with stable temperature and humidity levels.

Some more facts about IC production:

Moore’s Law is an observation that was issued in 1965 by Gordon Moore, the co-founder of Fairchild Semiconductor and CEO and co-founder of Intel. He observed that the number of transistors in an integrated circuit doubles roughly every year, and he predicted that this rate of growth would continue for at least another decade. Ten years later, he published an update, revising the doubling period to every two years. The figure shows the validity of Moore’s Law until today. All data points indicate the release dates of Intel microprocessors. 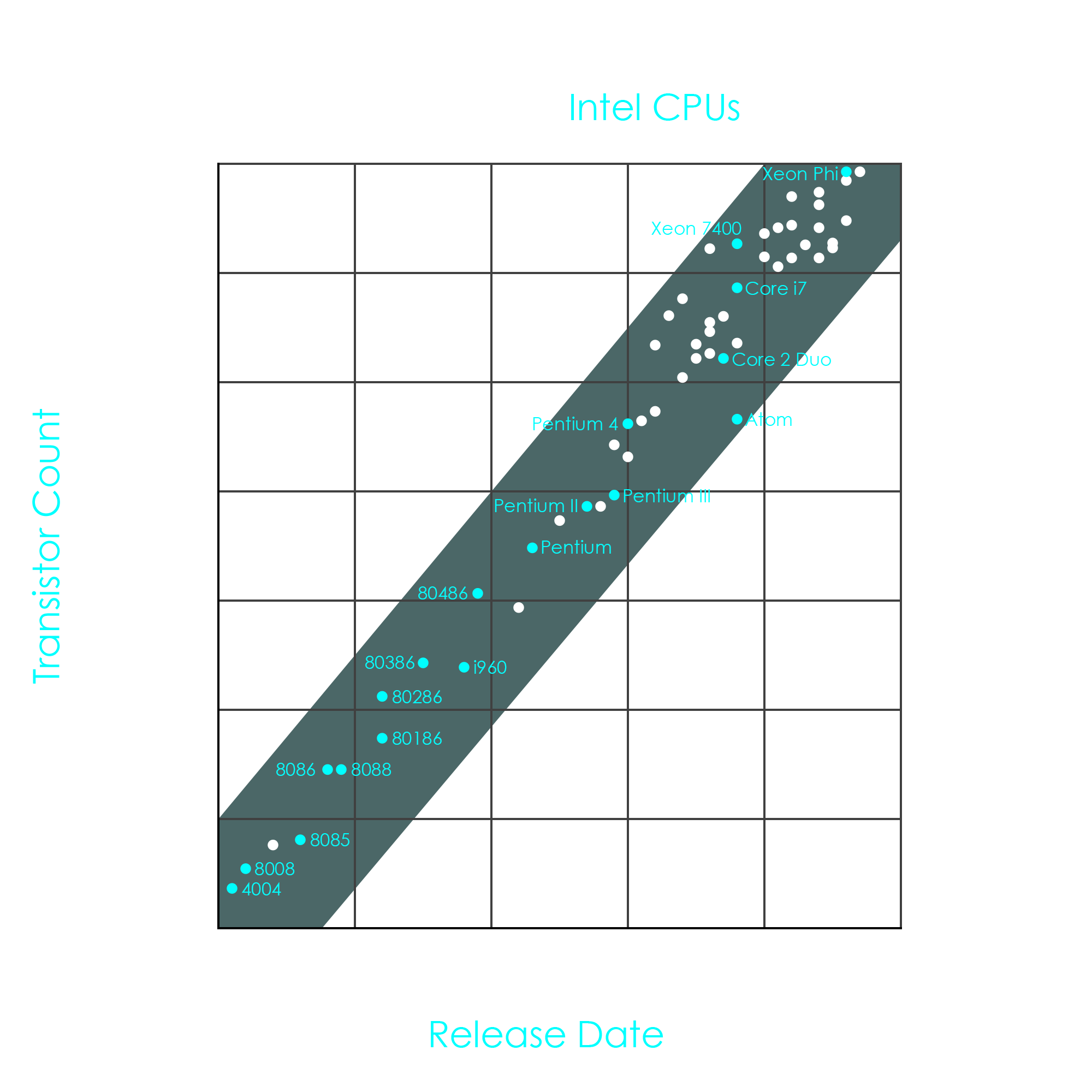 Main Menu Next - The Insides of a CPU